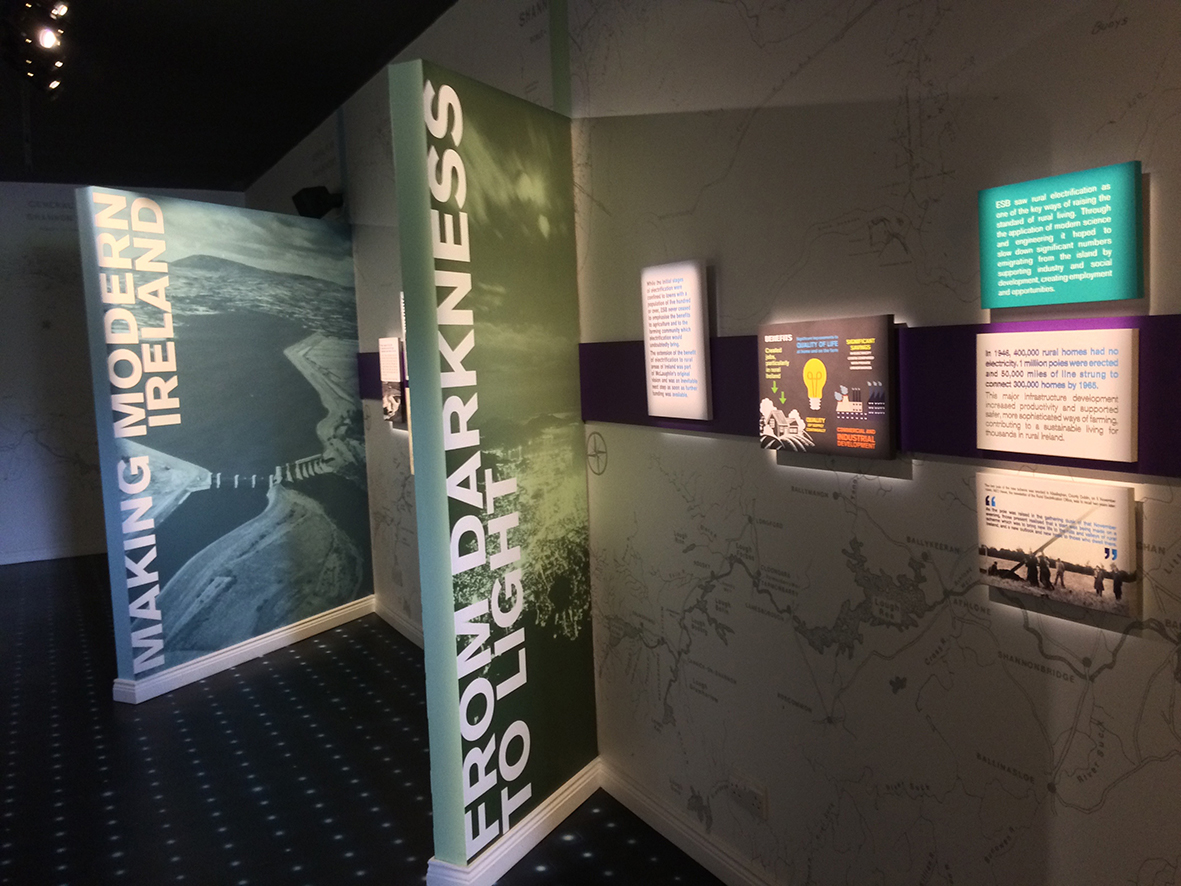 [We designed the Visitor’s Experience for Arndacrusha and were treated to a special tour of the exhibit. Three members of the ZMG team went on the field trip and this is a report of their time there.] 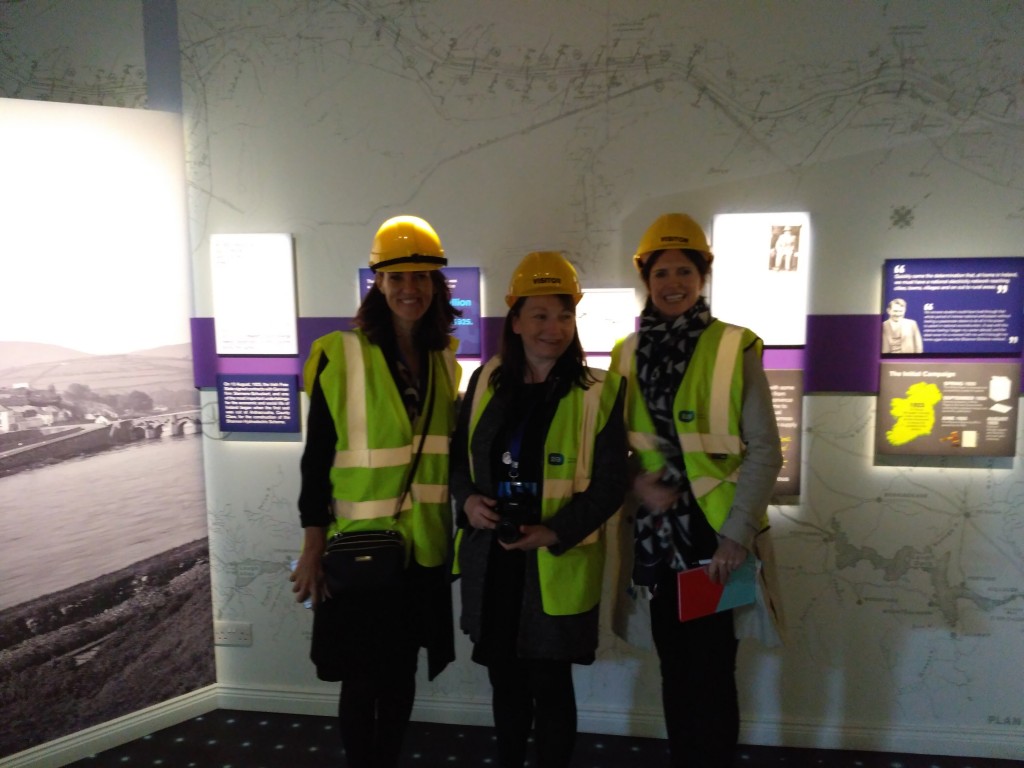 We learned so much on the Ardnacrusha tour. This power station brings to life a time in history that is little known to some, but to the local people of counties Clare and Limerick and to the 5,000 workers who helped build it, this was a time of huge national pride. The Irish State was only 3 years old but they had the passion and foresight to back an enlightened idea.

The driving force behind the scheme was a 28-year-old Irish engineer Thomas McLaughlin, working for Siemens in Germany at the time. McLaughlin and Siemens worked together to convince the Irish Government to let them harness the river Shannon and light up the nation. Somehow they persuaded the then Government to invest one-fifth(!!) of the country’s annual revenue (£5.8million) in the scheme and created the first national integrated electricity system in the world.

This is just one of the cool facts you’ll learn at the Ardnacrusha Experience…. 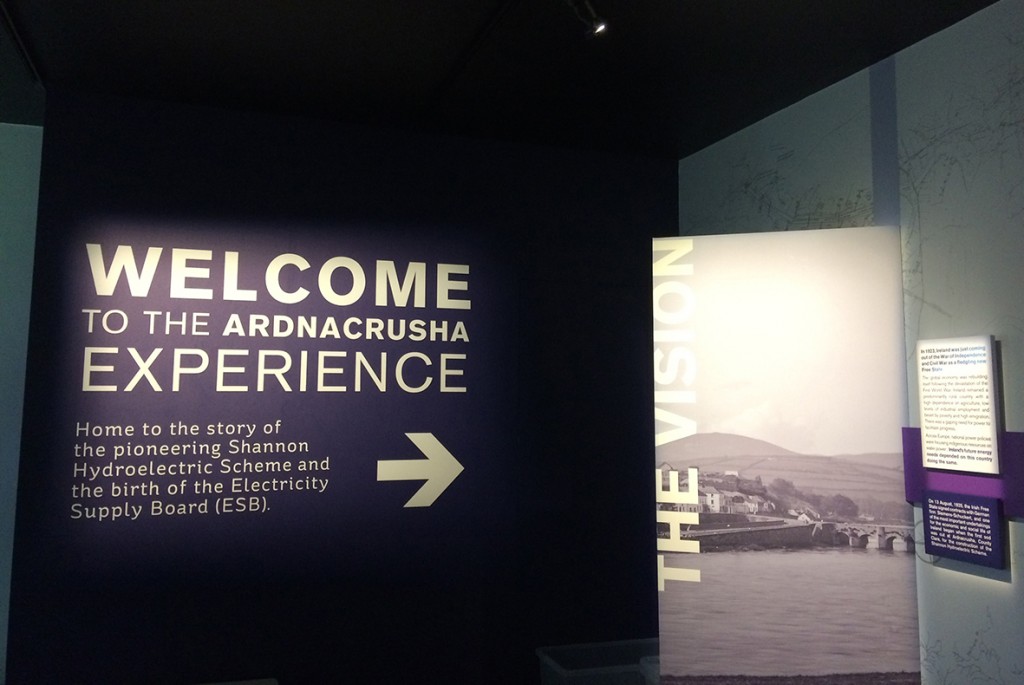 As you can imagine there weren’t many hotels or AirBnB’s in 1925 so a large portion of the 5,000 workers who moved to the area for employment had to find beds within the local community as well as in sheds and barns. A real community developed around this power plant over the 3 years it took to build.

All of the machinery used today is the original machinery built 90 years ago. Yes, you read that correctly, they are the original turbines, original penstocks and even some original light fixtures. How’s that for durable? 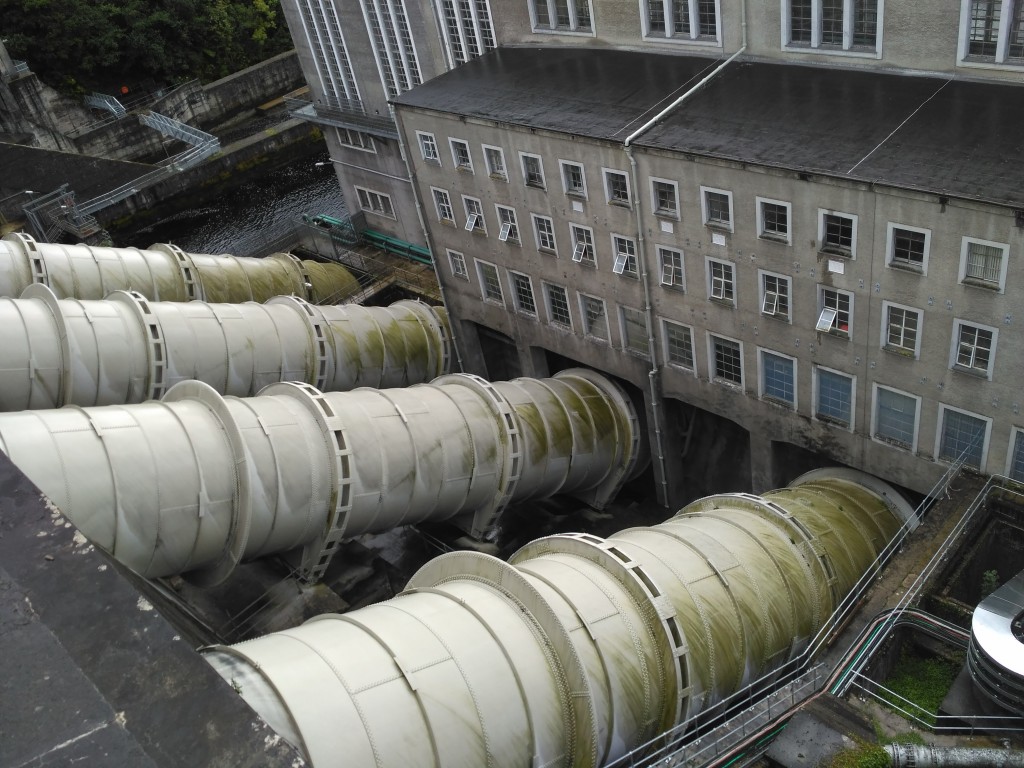 Another amazing thing about Ardnacrusha (and there are loads but I don’t want to ruin the tour for you) is that the whole country was powered from one control room, seen below. These switches still control electricity to the local region so be careful not to accidentally sit on one or there’ll be a lot people running around in the dark. 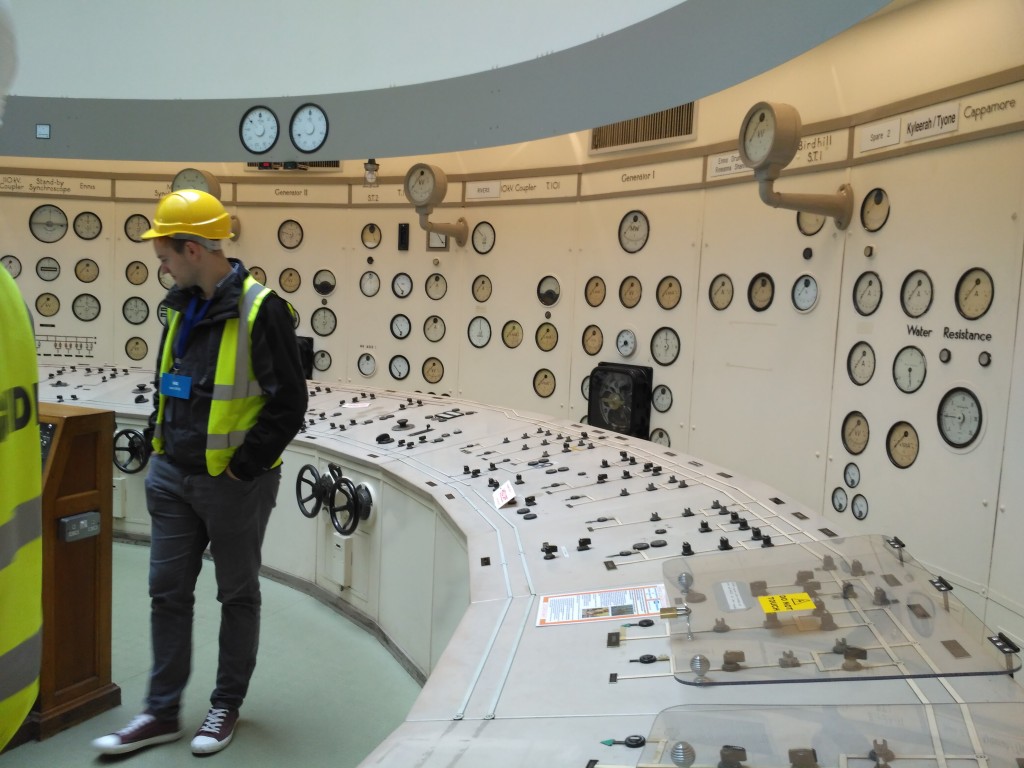 But this is my favourite bit….although the photo is a little dark and unimportant, it brought electricity to life in a new way for me. Look closely and you’ll see names of some Limerick towns in yellow. The electrical wires that you see above those names are the actual wires that travel over hills and valleys to the towns bringing electricity generated at Ardnacrusha. To a non-scientific person, this is pretty cool. 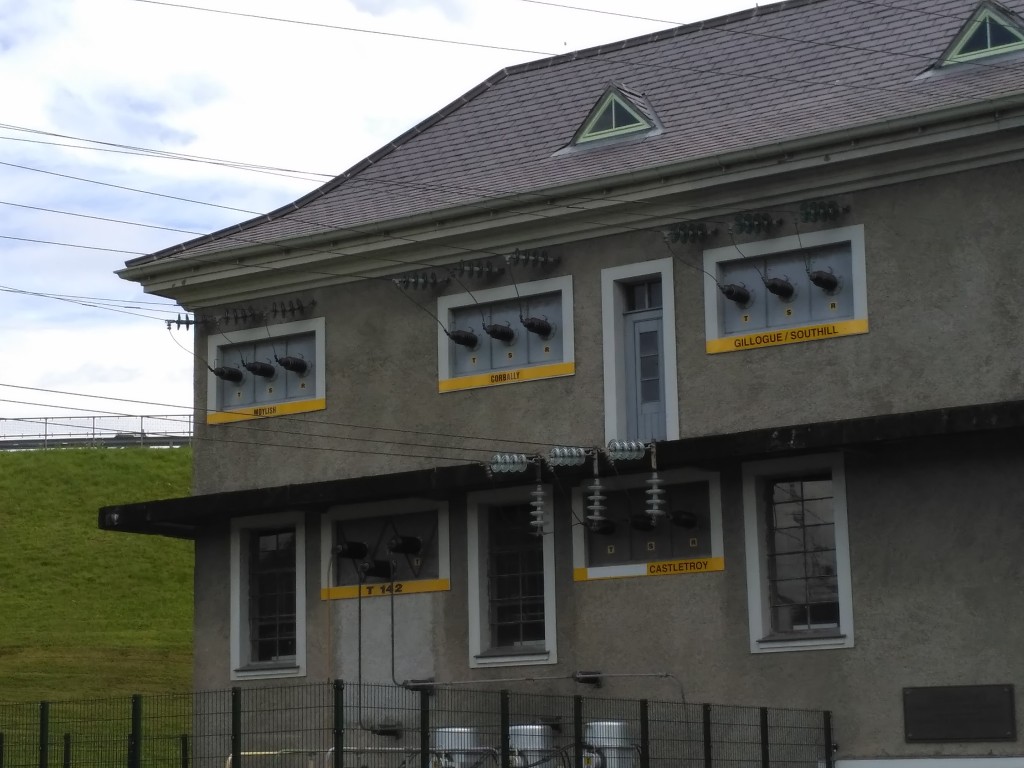 Even back then we were aware of environmental issues…

In order to get permission for this project, ESB were tasked with the feat to keep the salmon fish stocks high. To do this they created a man-made canal to help propel the salmon up the river (as they can’t swim through a power station). For the last 90 years the salmon spawn up river, swim to sunnier climbs and then 2 years later, find their way back to the exact spot they were born. Over 95% of them make their way back after the 2 years to start the cycle again. The care and attention paid to this aspect of the project at a working power station is phenomenal. You can see the fish being helped up the canal.

The construction of this ground-breaking scheme played a pivotal role in the development of Ireland in the 20th century and beyond. It generated huge employment paving the way for social, economic and industrial development of Ireland. At the time the 86MW produced was enough to meet the needs of the whole country. Today it powers 46,000 homes. 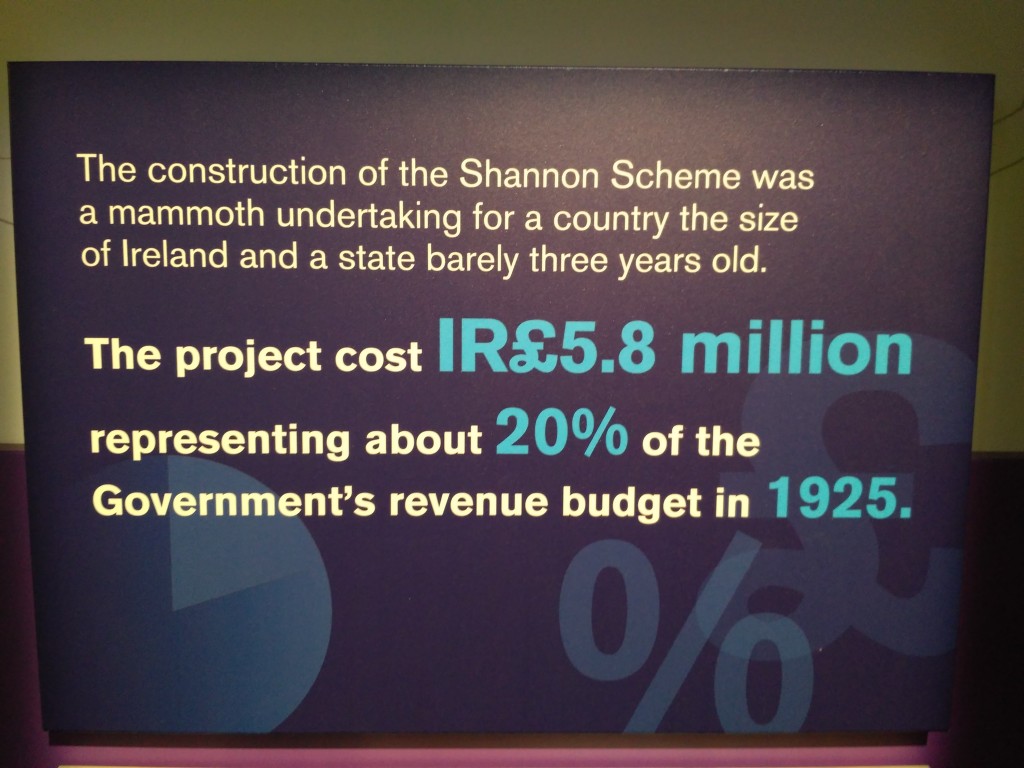 It was one of the largest engineering projects of its day and was a revolutionary infrastructural development. A campaign was launched to educate the public on this new modern innovation – electricity and 185,000 visitors came to see Ardnacrusha within the first 3 years of it opening!

The canal was designed to deliver a maximum of 400 tonnes of water per second to the power station via four penstocks. After passing through the turbine, the water is then returned to the main river by another artificial canal (the tail race). You can see the original penstocks still working today. 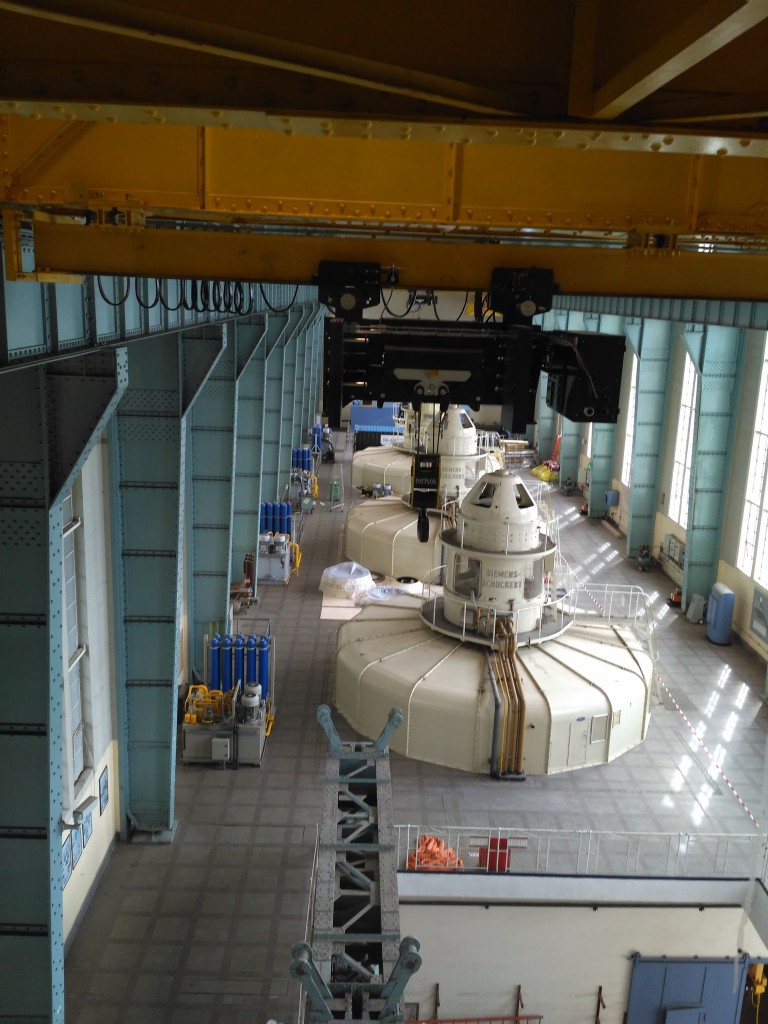 Once it started providing electricity, a team of ladies were hired to demonstrate to members of the public how it worked and why they should trust this new energy source.

We had a great time seeing our work in person at Ardnacrusha. If you’re interested in taking an Ardnacrusha tour, check out this website for more details. And if you’re curious about the work that went in to this exhibit, we’ll be posting the case study on our blog later next week!